Dear Mattie,
It's been an overwhelming two weeks.  Firstly, you had a dentist appointment and you sat in the chair all by yourself and looked so old I cried.  Secondly, you started swimming class, your first ever class of any type and you looked so happy I cried.  And Thirdly, you started preschool, which went very well.  Your only complaint was that it was too short.
Then, there were some changes at the school and you ended up with a new teacher which was confusing and upsetting.
"I hate the new teacher."
"You haven't met her yet."
"I want my old teacher to be my teacher."
I could understand why you felt this way.  I had been building her up all summer as the best teacher ever.  Then you had your home visit, which stregnthened your bond and I could tell that you were very comforted during the first few days of school knowing that she, along with the assitant who we also knew from last year, were your teachers.  But, there was nothing we could do.  And the changes woudn't have been made if they weren't necessary, so we continued on.
We got the chance to meet the new teacher yesterday and you mostly just hid your face in my coat.  Then in the car on the way home we made a deal,
Me:  "Tell you what:  Tomorrow, I'll check things out.  I will stay for a little while in the morning and see if this new teacher is good.  If I see that she's not a good teacher, then you can come home with me, and if she seems like a good teacher, and everything seems okay, then I will let you know and I will leave and come back to get you at pick up time."
Long pause...
...
You:  "Okay, I will TRY it."
...
So today they grouped the pre-k kids in with the kindergarten kids for the first part of the morning.  This was  huge change because last week, the pre-k kids met in the front of the school at the sand pit and the 5-6 of them parallel played in this quiet, sheltered area and it was very peaceful and managable.  But back where the kindergarteners start their day, it's a completely different scene; big boys climing trees, groups of kids building in the sand, organized games of freeze tag.  It was the boisterous scene that Joe was a part of for the last two years, not unfamiliar, just overwhelming for a not-yet four year old who has only been to school twice in his life.  Not to mention that these children had already been in school for a week and a half, and lots of them already knew each other from last year, so there was already a lot of familiarity amoung the kids, which you did not have.  We stood on the side of the sand box and watched.  I pointed out the kids that we knew from last year when Joe was a kindergartener.  Then you crawled around and explored in between the big bushes next to the front gate.  I was relieved to spot the pre-k assistant, since she knows us well and I mentioned to her that I thought this was overwhelming for you.
She suggested that I come on the walk with them to help with the transition and I thought I would, but then you walked up to her and said,
"I found a shell."
She said, "Do you want to show it to me?"
"Sure!  Follow me!"

So I took that as a moment to say,
"Well Mattie, it looks like everything is okay here, so I'm going to go and I'll be back."
The assistant chimed in cheerfully, "After story time."
"K.  Bye," you said, without looking back at me.
So we (Danny and I) left.

Then I went home and cried over the phone to Vaara about my worries.  I was worried because you're so special and I want these teachers to take care of you and see how special you are.  I was worried because I had left you with this big group of kids, some of them three years older than you and and I hoped that the assistant would look out for you.  I was worried because of your selfless nature.  When I picked you up after the first day of school, you said you were hungry and I had to tell you that it's okay to ask for a second helping of snack if you're still hungry.  You would never think to ask for seconds but I know you'd SHARE yours if you thought someone else was hungry.  It sounds like I'm exaggerating, but it's completely true!  Other moms come up to me all the time and say, "I think that Matthew and I have a special connection." and I just have to burst their bubble and say, "A lot of people feel that way around him."

But don't worry, because this story has a happy ending.
You were very relaxed and having a good time when I picked you up.  You weren't interacting with the other kids a whole lot, but you were right in the mix, and comfortable.  You weren't looking for me when I walked up and in fact, I had to catch your attention after ten minutes of standing there.  Both the new teacher and the assistant said you had a great day.  You ate four servings of snack!  You got to be a gnome in the puppet play.  You played outside for two hours.
The new teacher called you "A gem."
The assitant told me that the shell you found was a cicada shell and that when you brought it out in your hand, the other children were interested and gathered around to look, which gave you an "in" socially.
And the kindgarten teacher said to me, "You have the sweetest boy."
"I'm glad you noticed."  I said, relieved.

When I asked you what you thought of the new teacher you simply said, "Good."
And I said, "Good."  And we left it at that.

Then we went home, Dad came home from work, and when I got back from picking up Joseph at school, you had learned to do this... 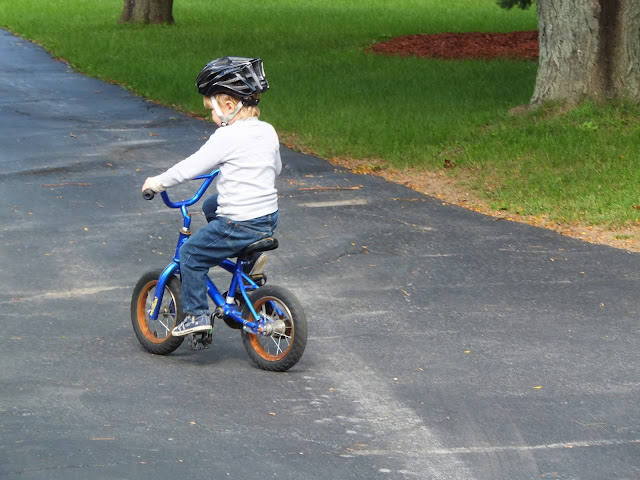 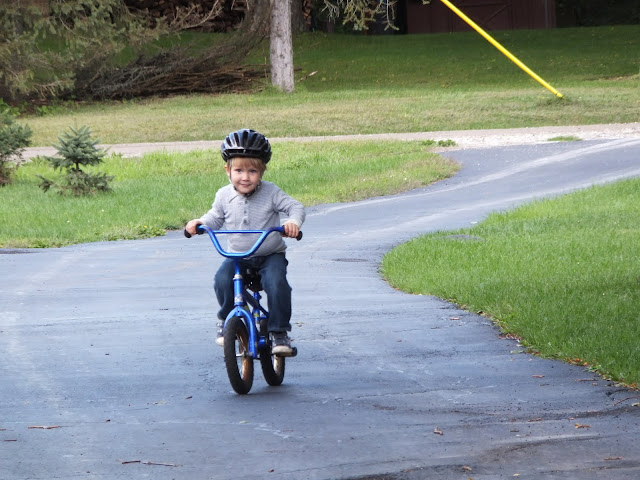 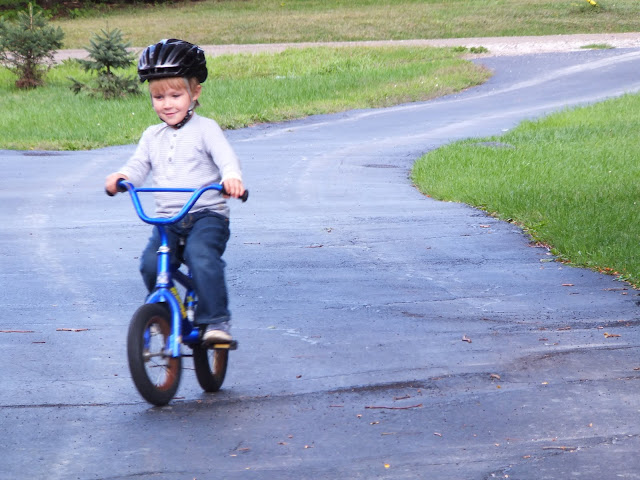